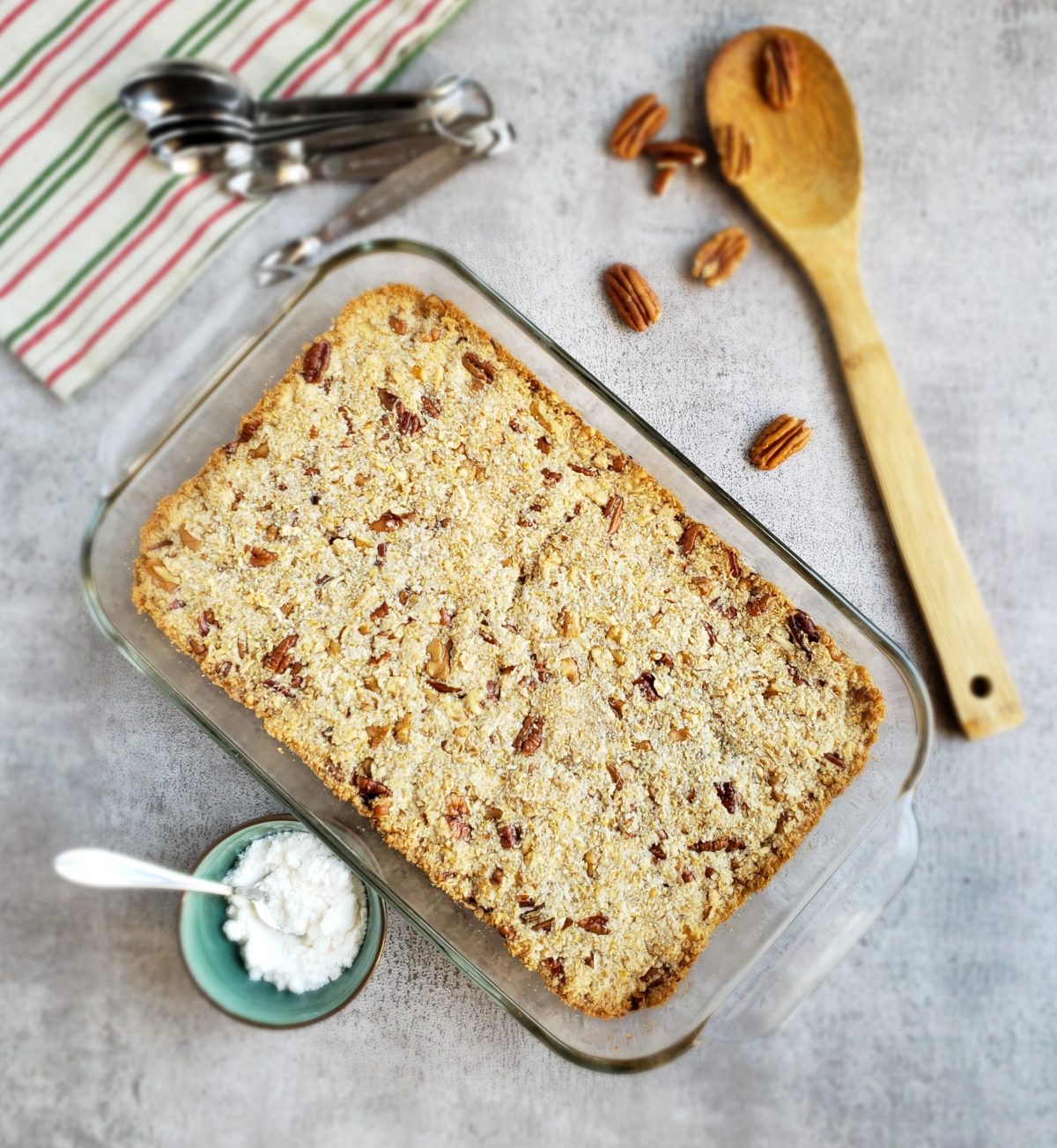 In addition to making your whole house smell like a bakery, these banana nut bread bars are a perfect replacement for any meal. They're super yummy, filling, and satisfying.
Jump to Recipe Print Recipe

These banana bread bars have become one of my favorite keto quick fixes. When I’m in a giant hurry in the mornings or I get that 4pm craving in the afternoon – or even on the way home after work from my desk job and hate everything… I know I can have one of these bars.

I LOVE banana bread. And these bars really check all the boxes: they are full of healthy ingredients (including fat), so I feel full quickly. And they actually taste like banana bread, which satisfies a very particular craving for me when I need it.

This recipe is set up for pecans because they are my favorite, but you can use walnuts or any other keto safe nut, just remember to adjust your macros since the fat/carb/protein content will most likely change with any ingredient change. Most of the time, people use either walnuts or pecans. Let’s take a look at the difference between these two healthy nuts… 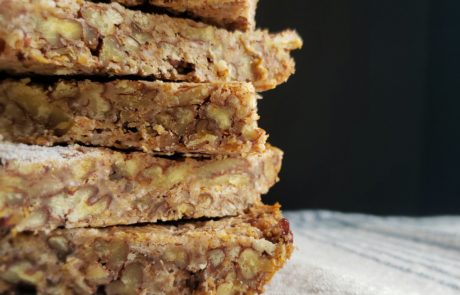 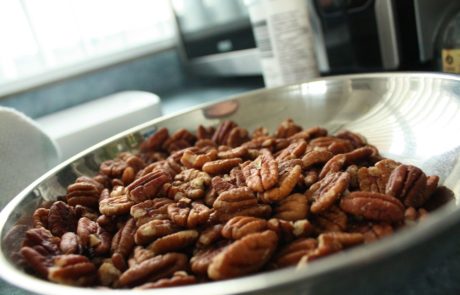 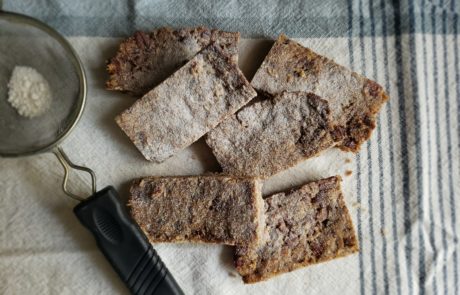 Walnuts and pecans both contain unsaturated fat, which is known to lower cholesterol levels. Both are similar in overall nutrient value, and make a great addition to your keto way of eating. 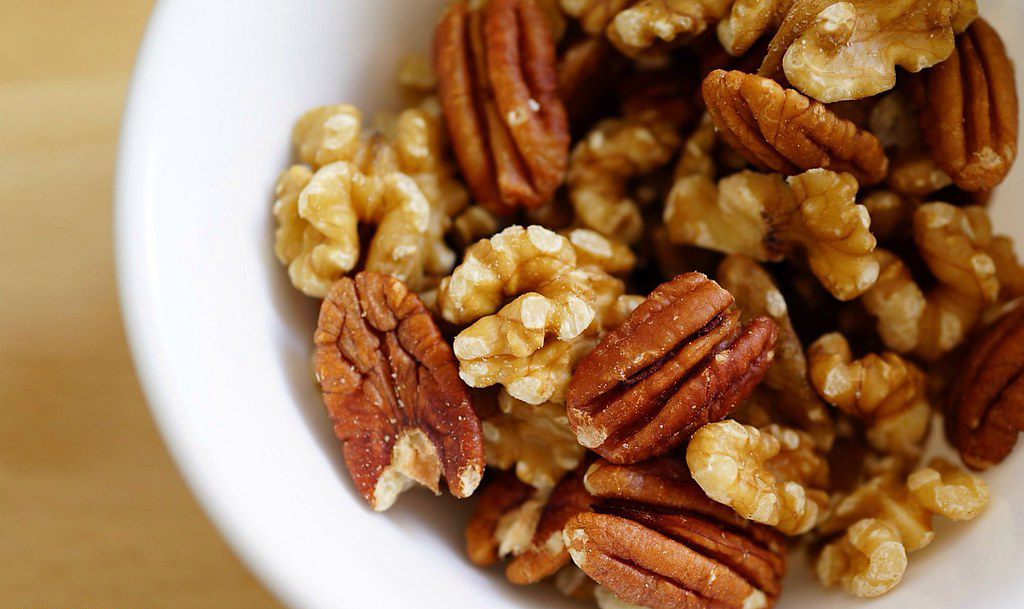 As we know, fiber makes us feel full longer, helping us eat less. Nuts like walnuts and pecans are a great choice for keto cooking because they’re both high in fat and contain a moderate amount of fiber. And as we know from keto school – fat also promotes satiety (that full feeling). An ounce of pecans has about 2.7 grams of fiber, while an ounce of walnuts has only 2 grams.

Although nuts are a great, healthy option for keto – if you’re trying to shed some pounds, or even maintain, you still have to watch and weigh your servings of them. An ounce of pecans has over 200 calories, while an ounce of walnuts has over 180! To give you a visual: an ounce of nuts is about 1/4 cup. That’s not a ton of nuts if you’re having a snack portion. So really watch your nut portions – weigh them out, just like everything else. Remember, snacks count! No free-feeding. 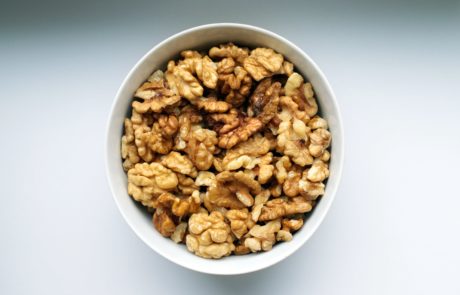 I can say from experience that nuts have seriously stalled my keto weight loss plan in the past. So if you’ve hit a plateau, there a few things you can do, but certainly examine your nut intake and dial it back, if needed. It’s okay if you’re counting them as part of a recipe, just don’t absentmindedly snack on them (or anything, for that matter) without watching and weighing them. 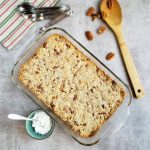 I like to keep these in the refrigerator until the day I take them with me since coconut oil can soften at room temp.  But don't worry, they're fine if you'd rather keep them in the cupboard.
Nutrition Facts
Banana Nut Bread Bars
Amount Per Serving
Calories 314 Calories from Fat 279
% Daily Value*
Fat 31g48%
Saturated Fat 12g75%
Sodium 12mg1%
Potassium 143mg4%
Carbohydrates 9g3%
Fiber 5g21%
Sugar 3g3%
Protein 5g10%
Vitamin A 9IU0%
Vitamin C 1mg1%
Calcium 49mg5%
Iron 1mg6%
* Percent Daily Values are based on a 2000 calorie diet.

We do not spam. You can unsubscribe anytime.

Because one size does not fit all.

Welcome to CustomKeto where the rest of us go to personalize our keto meal plans. This is a community of imperfect people seeking recipes and foods that are better suited to our particular needs And also delicious!

Get free stuff, not spam.